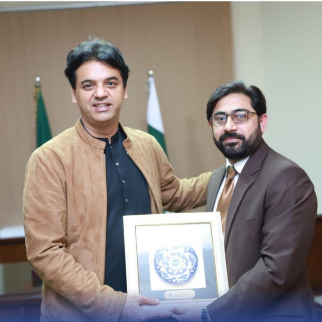 Muhammad Usman Dar, Special Assistant to Prime Minister (SAPM) on Youth Affairs held a meeting with stakeholders on Kamyab Jawan Programme’s component Startup Pakistan before its launch; starting from federal capital in the first week of December, this year. Representatives from leading universities of the country attended the meeting. About twenty members from various incubation centres and industries, coordinated through Pakistan Incubation Centre (PIN) also attended the session.

Mr. Dar while thanking the participants of the meeting from across the country said that the purpose of sitting together was aimed at brainstorming and sharing ideas regarding the success of Prime Minister’s Kamyab Jawan Programme.

Participants of the meeting suggested that the word entrepreneur needs to be branded and made a buzz word for greater motivation among the youth and encourage them for taking up their business ventures. They further suggested that HEC’s sponsored researchers must be local industry-based to help local industry. Later on, the Director CENTIN, Mr Yasir Amjad, had a one-to-one meeting with Mr Usman Dar to discuss further refinements and collaboration possibilities between Govt. of Pakistan and UMT. Mr Dar highly appreciated the identified gaps and their possible resolution by the Director CENTIN. Mr Yasir further suggested improving the system and process by nominating a capable and intellectual resource in the respective Ministry to collect suggestions, feedback, and volunteers for their contribution to making a robust system.