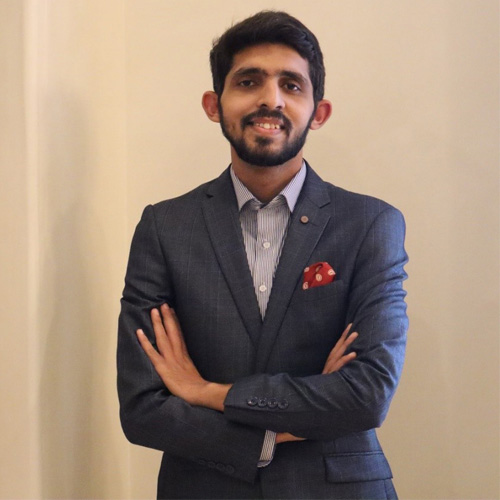 He founded an automotive startup, Auto Genie, that lead to a company of twenty people as well as the first investment raised from the local investor in the same industry, PakWheels and joined by Treet Group. Auto Genie was founded in 2014 and formally deployed its operations in early 2015 and went on to raise the fund by the year-end. The company was accepted at the country’s most elite incubation program at LUMS (Now National Incubation Center) and later got accelerated at PlanX- Pakistan’s largest and the first state-run accelerator. By the time he graduated, he already had over 15 people working in the company. He recently moved onto the next venture while Auto Genie is still in business. The venture was covered by all the leading media outlets in the country, also TechinAsia Singapore. Hamza is also published in top 25 under 25 by Tech Juice Pakistan in 2017.

In mid-2019, along with another UMT Alumni, Ahmad Zafar Khan (CS 2014), he has co-founded a technology venture that is building a community-focused social platform that aims to offer a well-connected and organized campus life-experience for the students around the globe. By enabling them to buy, sell, interact and organize events in the closed communities of their colleges and universities. The platform is named as Kampus. As we speak, it is under development. The company is incorporated in the United States and aims to partner up with the world’s leading social platforms. Ahmad, also UMT Alumni, heads the venture as CTO & CEO and Hamza is serving as CPO (Chief Product Officer). The core team in addition to him and Ahmad comprises on an Indian entrepreneur (Graduated from Babson, Boston US), an Irish angel investor and risk analyst based in Dublin, Ireland.

Emerging from a business family. Hamza is also a director at an endeavor in the manufacturing segment. This company, UNISOURCE, is manufacturing car care products and FMCGs with a motive to source and sell locally hence called Unisource. The company has signed contracts with a few established distribution networks to push the locally produced products into the market under various brand names.

Part of the core team for Asia’s first Startup Grind Conference held in Islamabad in October 2019.